The Indian Institute of Science (IISc) was conceived as a ´Research Institute´ or ´University of Research´ by Jamsetji Nusserwanji Tata, in the final years of the 19th century. A long period of almost thirteen years was to elapse from the initial conception in 1896 to the birth of the institute on May 27, 1909. The early history of the Institute is a fascinating chapter in the story of higher education and scientific research in India. The cast of characters in the drama that led to the establishment of the Institute includes, in addition to its charismatic and generous founder J.N. Tata, figures from the pages of Indian history. There is Swami Vivekananda, whom J.N. Tata befriended on his famous voyage to the United States, the Maharaja of Mysore, Shri Krishnaraja Wodeyar IV and his mother then acting on his behalf, and Lord Curzon the Viceroy of India, whose first task on arrival on December 31, 1898 was to receive a draft proposal prepared by the Provisional Committee set up to plan the establishment of the Institute. The plan was shepherded through many difficult years by Burjorji Padshah, a close associate of J.N. Tata. Unfortunately, J.N. Tata died in 1904 unaware that his vision would indeed be realized a few years later. When the British Government finally issued the Vesting Order in 1909, an unmatched experiment in higher education and research was launched in India. IISc is truly the first example of a public-private partnership in this country; an institution, whose evolution over a century is testimony to the robustness of its foundations. 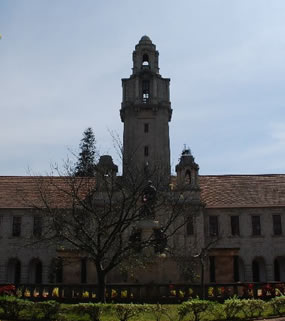 The Institute occupies nearly 400 acres of prime land in Bangalore, generously donated by the Maharaja of Mysore in March 1907. Indeed, the contribution from the princely state of Mysore was the decisive element in determining the location of J.N. Tata´s proposed institution. Remarkably, in a gesture unmatched in the annals of private philanthropy in India, Tata did not wish his name to be associated with the Institute. His dream was to create an institution that would contribute to the development of India. The name, Indian Institute of Science, which was finally chosen, reflects in every way the wishes of J.N. Tata. Visitors to Bangalore who seek out IISc still have to ask local residents for directions to the ´Tata Institute´, a clear recognition that Jamsetji Tata´s act of generosity has remained undimmed in public memory, despite the passage of a century.

The Institute began with only two departments: General and Applied Chemistry and Electro-Technology. The first Director, Morris W Travers began the task of organizing the Institute shortly after his arrival in India at the end of 1906. Travers began the construction of the main building, which is one of Bangalore´s landmarks today. The Departments of Organic Chemistry and Biochemistry were among the earliest to be established. The Physics department came into being in 1933, when C.V. Raman became the first Indian Director of the Institute. In the century that has passed since its inception, IISc has grown to become India´s premier centre for research and postgraduate education in science and engineering. The evolution of the Institute over the past one hundred years has mirrored the development of science and technology in India. A long history, a strong tradition of academic research and an ambience that favours scholarly activity have been important elements in making the Institute a most attractive place for students and faculty. As the Institute has grown, several new areas of research have been established, many of them for the first time in India. The Institute´s departments in fields ranging from Biochemistry to Aerospace Engineering have served to nucleate research and development in both the public and private sectors. The faculty and alumni of the Institute have been responsible for establishing and spearheading many new institutions and programs across the country, reflecting in a real sense, a major contribution of this centre of learning to national growth and development. Homi Bhabha conceived the idea of the Tata Institute of Fundamental Research (TIFR) and an Atomic Energy Program while working in the Department of Physics. Vikram Sarabhai, the founder of India´s space program was an alumnus. Following his premature death, the Indian Space Research Organization (ISRO) was built by the farsighted leadership of Satish Dhawan, who simultaneously held the position of the Director of the Institute with the greatest distinction. The first Indian Institute of Technology (IIT) at Kharagpur was established by J.C. Ghosh, who was the Director of IISc in the critical period 1939-48, during which much of the activity in engineering was initiated at the Institute. Many of India´s most distinguished scientists have been associated with the Institute as students or faculty. Notable among them are G.N. Ramachandran, Harish Chandra, S. Ramaseshan, A. Ramachandran, C.N.R. Rao and R. Narasimha. Alumni of the Institute head many major organizations in India and abroad.

The Institute offers a variety of Master´s degree programs in Engineering, an integrated Ph.D. (post-B.Sc.) program in Sciences and Ph.D. programs in a wide spectrum of disciplines in science and engineering. Last year the Institute launched a 4-year undergraduate program leading to a B.S. degree, with an opportunity for students to obtain a broad foundation in science, including an exposure to research. The research laboratories at the Institute are extremely well equipped. Many national facilities are housed at the Institute. The library and computational facilities at the Institute are amongst the best in India. A major program for modernizing laboratories is underway. The Institute hosts hundreds of visitors from India and abroad every year and is the venue for many major national and international academic events.

The face of science and engineering research has been changing very rapidly over the past few years. In approaching the second century of the Institute many new activities have been initiated. Notable among them are the interdisciplinary Ph.D. programs in Mathematical Sciences and Nanoscience and Engineering. A new program in Bioengineering has been launched this year. These programs are intended to blur the traditional boundaries between disciplines, thereby promoting cross-disciplinary research. An M.Tech. program in Transportation Engineering was introduced in 2010 and a Master´s program in Management with a focus on Technology Management and Business Analytics was started last year. New centres in the areas of Earth Sciences, Climate Change and Neuroscience have been established in the last few years. The Institute hopes to foster collaborative and interdisciplinary research in a vigorous fashion in the years to come. The Institute is also committed to promoting post-doctoral research in the areas of science and engineering.

The Institute engages in interactions with society and industry through a variety of outreach programs. The Centre for Scientific and Industrial Consultancy (CSIC) and the Society for Innovation and Development (SID) promote collaborative interactions with industry, while the Centre for Continuing Education (CCE) provides an opportunity for working scientists and engineers to enrich themselves academically. The Institute actively promotes programs that encourage bright young school and undergraduate students to undertake research careers. The Institute administers the Kishore Vaigyanik Protsahan Yojana (KVPY) program of the Department of Science and Technology (DST). The Institute´s commitment to socially relevant research is specifically emphasized by the activities undertaken at the Centre for Sustainable Technologies (CST), together with the Karnataka State Council for Science and Technology (KSCST), which is housed on the campus.

The Institute completed a century of existence in 2009. It has embarked on a new phase of expansion and renewal. To live and work at the Institute is a special privilege. The Faculty, Staff and Students of the Institute can be rightly proud of its past and optimistic about its future.