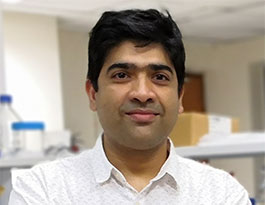 As a group, we are excited about understanding the movements of mRNA in the cytoplasm between different functional states. These movements contribute to regulation of gene expression at the steps of, (a) Translation and (b) mRNA decay in a variety of cellular processes.

mRNA fate decisions play a crucial role in regulating variety of cellular processes including development and differentiation, synaptic plasticity, ageing and diseases such as cancer, neurodegenerative disorders and cystic fibrosis. The proteins associated with mRNA control its individual fate in the cytosol by promoting certain functional transitions and inhibiting others. We aspire to elucidate the molecular mechanisms underlying such movements using Saccharomyces cerevisiae (budding yeast) and human cell culture as model. We are employing a combination of genetic, biochemical, imaging and genomic tools to address the following aims: (a) Understanding the roles of arginine methylation in mRNA fate decisions with a specific focus on RGG-motif proteins; (b) Identifying the mRNA specificity determinants during translation control and decapping; (c) Elucidating the connection between translation control and endocytosis/protein trafficking; (d) Understanding the mechanistic basis of RNA granule disassembly; and (e) Role of translation control and decapping in Cancer establishment and progression. 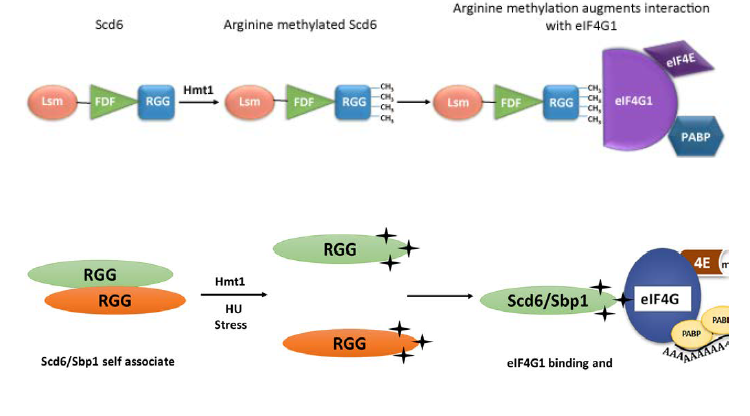 Self-association of RGG-motif competes with eIF4G-binding: It is currently unclear how arginine methylation affects interaction of RGG-domain proteins with eIF4G. Our latest results propose a mechanism whereby RGG-domain self-associates in Scd6 and Sbp1, which compete with RGG-eIF4G interaction. This competition is modulated by arginine methylation. Such modulation appears to be cue-specific since methylation levels go up in response to hydroxyurea treatment. This study proposes a new paradigm in regulation of translation repression through self-association of RGG-domains (Fig. 2).

We aim to understand the role of arginine methylation in regulation of other RGG-motif proteins. Specifically, we would like to understand the mechanism(s) underlying specificty of substrate methylation and role of RNA in determining substrate specificity. RNA granules play an important role in translation control and mRNA decay. One of our research aims to uncover the mechanistic basis of RNA granule disassembly. Through this direction, we hope to understand how mRNAs return back to translation upon removal of stress. We also aim to understand the contribution of RGG-motif proteins to other cellular processes specifically endocytosis and trafficking.