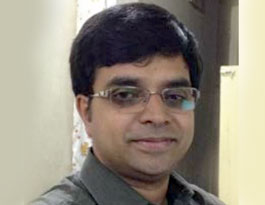 Our lab is broadly interested in understanding mechanism and regulation of DNA double-strand break repair, generation of chromosomal translocation and its role in oncogeneis, and evaluation of novel small molecule inhibitors in cancer treatment.

Mechanism of generation and development of chromosomal translocations in human leukemia and lymphoma: We have identified the role of G-quadruplex DNA, one of the non-B DNA structures in the generation of chromosomal translocations. We reported existence of two G-quadruplex structures flanking the HOX11 breakpoint regions, which can explain the fragility observed at the HOX11 gene during t(10;14) translocations in T-cell acute lymphoblastic leukemia. Biochemical studies in tandem with intracellular studies revealed that AID, a cytidine specific deaminase, could contribute towards observed fragility at the MYC region. In an interesting observation, we found that formation of G-quadruplex structure on a DNA can protect it against ionizing radiation.

RAG cleavage mechanism at recombination signal sequences and non-B DNA structures and their role in genomic instability and cancer: We showed that RAG can also act as structure-specific nucleases leading to genomic instability and cancer. In an interesting study, we have reported that regulation of RAG binding and cleavage on heteroduplex DNA is dependent on the length, sequence, and phasing of the double-stranded flanking region. A V(D) J recombination nonamer when present next to heteroduplex DNA can improve the efficiency of RAG-mediated cleavage in non B-DNA structures. In an interesting study, we have also investigated impact of clinically used HIV inhibitors on immune system in mouse models by demonstrating its impact on RAG functions in host cells.

Double-strand break repair (Efficiency, mechanism and their pathological implications): We showed that MMEJ can operate in normal cells even when classical NHEJ is present. In an independent study, we showed that MMEJ is critical for double- strand break (DSB) repair in mitochondrial DNA, which can explain the mechanism of DNA deletions observed in several diseases associated with mitochondrial genome instability. Further, we showed that homologous recombination mediated DSB repair is important for maintaining continuity of mitochondrial genome when DNA breaks are induced.

Cancer therapeutics: In an important finding, we have identified a small molecule inhibitor, (SCR7) that can abrogate nonhomologous DNA end joining, one of the DSB repair pathways, both in vitro and ex vivo in a Ligase IV dependent manner. Importantly, studies also revealed potential use of SCR7 in CRISPRCas9 mediated precise genome editing. Further, our studies have revealed that SCR7 can be present in multiple forms and can inhibit NHEJ efficiently in a Ligase IV dependent manner. Dose titration studies showed that SCR7 can bring down the effective dose of gamma-radiation by 50-75% during radiotherapy. We observed that Disarib induces cytotoxicity in a BCL2 dependent manner with an IC50 between 2-3 μM. Disarib inhibited tumor progression in all the animal models tested without causing significant side effects. Interestingly, head to head comparison of Disarib and ABT199 (the only FDA approved BCL2 inhibitor) revealed that tumor cell death induced by Disarib is significantly higher when analysed using both ex vivo and in vivo model systems. Disarib is patented in India and preclinical studies using Disarib are in progress.

All the ongoing projects related to chromosomal translocation in cancer, role of RAGs in genomic instability and immune diversity, mechanism of DNA double- strand break repair in normal and cancer cells, and cancer therapeutics will be continued. In addition to these, some of the important projects are listed below. Role of RAGs in brain development and glioma genesis; investigation on microRNAs that can regulate BCL6 in diffuse large B cell lymphoma (DLBCL) and its impact in lymphoma genesis; spatio-temporal studies to understand the mechanism of BCL6 translocation in DLBCL; understanding the molecular mechanism of generation of BCL11b mutations that are responsible for leukemogenesis; understanding the mechanism of mitochondrial genome fragility, role of DNA structure and replication; characterization of novel DNA singlestrand break repair pathway in mammals; pre-clinical studies using novel BCL2 inhibitor, Disarib and identification of novel DNA repair inhibitors that can block DNA repair pathways in a cancer cell specific manner in radio and chemoresistant cancers.