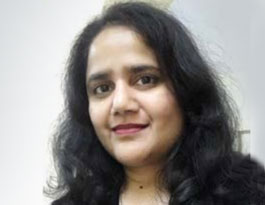 My lab investigates chromosome organization and its impact on various chromosomal transactions. Of particular interest are SMC (Structural Maintenance of Chromosomes) complexes that mediate higher order chromatin organization, based on their DNA binding and tethering properties. We also investigate the functional significance of post-translational protein modifications, particularly those mediated by Ubiquitin and SUMO E3-ligases. Recently we investigated roles of a SUMO E3-ligase and a putative ubiquitin-ligase associated with the Smc5/6 complex.

Eukaryotic chromosomes undergo extensive structural reorganization in order to facilitate accurate segregation during mitosis. Newly replicated sister chromatids are paired intimately at centromeres and chromosome arms. Chromosomes are also condensed prior to metaphase of mitosis. These structural attributes (cohesion and condensation) are dependent on SMC (Structural Maintenance of Chromosomes) protein complexes, which are evolutionarily conserved, essential for viability and for maintenance of chromosome organization. SMC complexes alter chromosome organization by their ability to bind and bring together different regions of DNA that may be on the same (cis-DNA interaction) or different (trans-DNA interaction) DNA molecule (as shown for cohesin in Fig. 1). Cohesin, Condensin and the Smc5/6 complex are three well-known SMC complexes of interest to us. 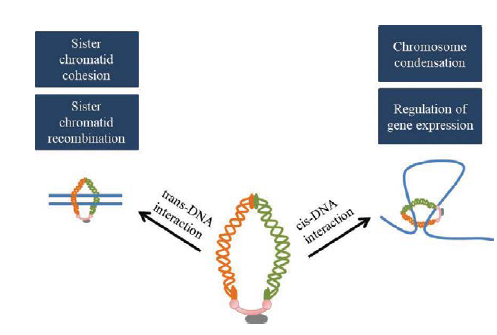 Cohesin is a conserved SMC complex, first identified due to its role in sister chromatid cohesion. Dysfunction of cohesion proteins results in disorders in humans characterized by severe developmental abnormalities, and is also associated with cancer, highlighting the biomedical relevance of functional studies of Smc proteins. As a step towards understanding the molecular basis of cohesion, I had earlier identified the chromosomal addresses of Mcd1p, a component of cohesin, leading to identification of specific cohesin binding sites or Cohesin Associated Regions (CARs) on yeast chromosomes. Our group also identified a cohesin dependent silencing boundary element that can limit the spread of rDNA (ribosomal DNA) silencing, suggesting that cohesin can affect gene expression.

We also study the Smc5/6 complex that is required for recovery from replication stress and DNA repair. Recently, we have investigated the role of Mms21/ Nse2, one of the subunits of the Smc5/6 complex that has SUMO E3-ligase activity and hence can conjugate SUMO (Small Ubiqitin related Modifier) to various protein targets. By creation of SUMO- ligase defective mutants of Mms21 and sumoylation defective variants of its targets, we are testing the importance of sumoylation of chromosomal protein targets of Mms21. We found that Mms21 mediated sumoylation is crucial for the maintenance of chromosome stability, especially of torsionally constrained chromosomes. We also study Nse1, a RING-domain subunit of this complex is a putative ubiquitin ligase required for chromosome replication and stability. We are currently investigating the role of the Nse1, 3 and 4 trimeric subcomplex of the Smc5/6 complex.

Our Laboratory has received extramural research funding from the following organizations: